Every year we take in several bilingual students and students from Eastern Europe who are native speakers of other Slavic languages. It is essential for Language Link to provide a professional approach when dealing with these students. As a result, we’ve decided to announce a special program for bilingual and Slavic language speaking students for the RLUS programme at Language Link (Moscow).

The goal of this program is to give all the students an opportunity to improve their level of Russian language significantly and to be able to pass TORFL B2 or C1 level, as well as to extend their knowledge of Russian culture. 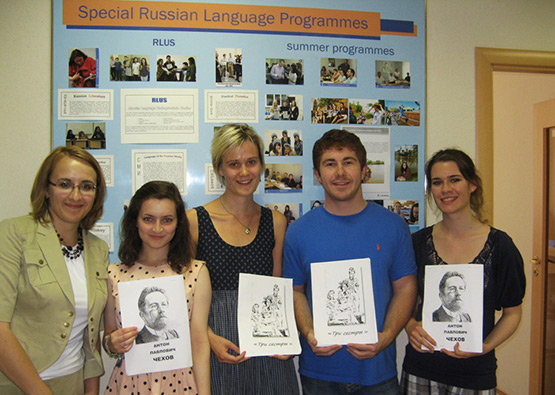 
What will I be able to do after the program?

Most students on the traditional RLUS grammar course are taught how to build the correct grammar forms and constructions. For a group of bilingual students the task is different.

Many bilingual students can speak Russian like a native, so the key focus will be on the analysis of language forms. The students will learn Russian orthography and punctuation like Russian children do at school. As a rule, bilingual students can speak Russian fluently, but their written Russian is not at the same level. This may cause misunderstandings in the students’ written work. In order to correct this the students will:

We will also use the materials of the Unified State Exam in Russian language to give the students the possibility to evaluate their level in comparison with the requirements expected of Russian high-school graduates.

The course will include:

2. Translation (from English into Russian).

3. Key or precedential texts of Russian culture – “All Russians know them”.

These precedential or key texts are texts known by many Russians due to their cultural importance. These texts are well known in written and spoken Russian culture and can be used on special occasions. Russians have knowledge of these texts from their childhood and schooldays. They often refer to themes, situations and symbols from these texts in everyday life, and use them to enhance their communication.
For example, every Russian understands the phrase “Plushkins of all countries, become a union!”, or “The society now needs Oblomovs or Shtolts”, but these phrases make no sense to even bilingual speakers, which is why we’ve created a course with the following content:

This course will be taught using aspects of speaking practice, essay writing, and reading.